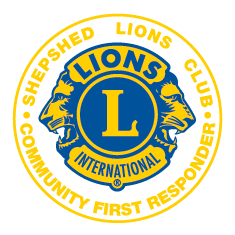 New recruits will join hundreds of volunteers living in local communities across the region who are trained to provide life-saving treatment to residents in their area in the vital first minutes of an emergency until the EMAS ambulance clinicians can arrive. Every second counts when someone has a serious illness and simple interventions can be performed by CFRs to save lives or prevent disability.

First responders help provide emergency life saving care to patients. They are charities founded and run by volunteers who give up their spare time to attend appropriate 999 calls directed through EMAS control.The on-call CFR is dispatched by EMAS at the same time as an ambulance response and because by definition they live in the local area where the incident has taken place, they can be first on the scene providing essential treatment, while ambulance crews travel to the scene.

Shepshed Lions Club Community First Responders Scheme is always looking for new members.  Not only do our members provide a vital service to our local community, but we also learn valuable and potentially life-saving skills in first aid essential life saving skills.  Are you…

Up for a challenge?

Keen to help people in your community?

Able to give up some free time?

The holder of a full, clean driving license?

To learn more or to become involved with one of our CFR teams, please contact Bob Lilley on 01509 508 265 or email thelilleys15@gmail.com we look forward to working with you to help save more lives soon.

Some statistics about the team. I think you may be surprised how much work in our community that the First Responders undertake.

In 2014 the team completed 2241.75 hours of voluntary service and attended 461 different incidents.

In 2015 the team completed 2954.5 hours of voluntary service and attended 974 different incidents.

Since the scheme started we have provided over 20,000 hours of volunteer hours and attended over 5000 incidents in support of our communities and EMAS.

“ CPR and Defibrillators – Dispel the Myths”

The First Responders is a team of 18 volunteers who have worked alongside East Midlands Ambulance Service (EMAS) since December 2013, attending medical emergencies ranging from cardiac arrests, heart attacks, strokes, asthma attacks, diabetic events and other incident. This equates to 10,429 volunteer hours with 3082 incidents attended (As of may 31st 2017). We operate in the Charnwood Borough areas of Loughborough, Shepshed and surrounding villages. The work we do as a group is highly valued by both the community and EMAS. Our team has received numerous testimonials to EMAS, from members of the community we have served

The First Responders is entirely self-funded, and a key part of our work involves doing outreach presentations and education on Cardio Pulmonary Resuscitation (CPR) and using an Automated External Defibrillator (AED).  We have delivered numerous presentations, where we invite people who attend to make a contribution to our funds. We believe this aspect of our work to be of pivotal importance, as all evidence and research shows that education on the use of AEDs plays a vital role in saving lives. We have a number of Resuscitation Mannequins and training defibrillators to allow persons to deliver effective CPR and use a Defibrillator in a safe, friendly and helpful environment.

We are aware from this work in our communities that many people are fearful of getting involved in incidents of this nature in the public domain, as they do not know how to do CPR effectively and use an AED.  We want to implement a project called ‘CPR and Defibrillators – Dispel the Myths’ and raise public awareness and confidence in this area.

The use of AEDs by people who were not health professionals was introduced by the Defibrillators in Public Places Initiative (1999) that recommended placing AEDs in public places where ambulance service records showed most need. Research shows that when someone has a cardiac arrest, every minute without CPR and defibrillation reduces chances of survival by 7 – 10% (Resuscitation Council UK, 2015).  In 2017/17 EMAS has forecast it will respond to 943,377 emergency calls.  Even when they can attend promptly, it is only on exceptional occasions that they will be able to attend and provide defibrillation within the recommended 3 – 5 minute time window.

We would like to train people in our local communities to arm them with the skills that could reduce the number of premature deaths. In the first year our ambition would be to train 250 people.  In addition to this we would also like to provide funds to support a number of Community Public Access AED’s in the local communities we support. When potential sites are identified, we would provide training in CPR and defibrillator use, in order to increase public confidence, reassurance and the means of putting training into practice.In order to make this project viable we would like to purchase a suitable projector and screen to show videos, presentations and educational work in support of this initiative. We would also like to purchase training defibrillators and mannequins, enabling members of the public to use the equipment as part of the training and education process.

This project will support every member of our communities regardless of age, gender, religion, sexual orientation or creed. It benefits people who are ill and their family and friends.  With current budget cuts to EMAS and increasing pressure on our emergency services, it is vitally important we can empower communities to use equipment like this, which can save lives.

Each Community Public Access Defibrillator (CPAD) contained in a cabinet costs £1015, so if we are successful in reaching our target we can put 20 CPADS into the communities we serve all over Charnwood Borough. The additional funds raised will be held in reserve to replace batteries and pads in the defibrillators.

We are delighted to announce that we were successful in winning the Tesco Bags of Help funding and have received a grant of £4,000. We have also had a funding grant from East Midlands Airport Community Fund, Shepshed Lions Club, and numerous public donations. We also received a grant from Shepshed Town Council. We have also made a donation from our own Community First Responder funds. These funds have enabled us to purchase 5 CPAD’s and cabinets to put into our communities.

We have placed one CPAD on the wall of Campbell Scientific, Hathern Road, Shepshed. Campbell Scientific very generously arranged for electric cabling to be fitted from their main building to the perimeter wall of their premises to enable us to install a cabinet with a heater to maintain the defibrillator in cold weather. This was funded by them and arranged by Mr. Paul Whitmore. We would like the thank the company and Paul for their generous support.

We have placed another CPAD at Rowlands Pharmacy, Leicester Road, Shepshed. This is in conjunction with the Pharmacy and Forest House Surgery, who own the building. We would like to thank them both for supporting this project to put more CPAD’s in our community. The CPAD is on the front wall of the Pharmacy facing onto Leicester Road.

We have placed another CPAD has been fitted to the wall just inside the car park of The Horse, Bar and Restaurant on Ashby Road, Shepshed. This with the support of the Licensee Lee and owner of the premises, Richard Waldron, who allowed us to put it in place. We would like to thank them both for their support.

We have also placed a CPAD on the outside wall of the Gorse Covert Dental Practice, Maxwell Drive, Loughborough. The CPAD is fitted by the door of the premises facing on to Maxwell Drive. We would like to thank the Practice for supporting us by allowing us to place the CPAD on the wall.

We have now also fitted another CPAD on the outside wall of the Jolly Farmers Public House, Iveshead Road, Shepshed with the kind support of John and Lynda Savage and the Licensee Paul Spencer. Another has been fitted on the front of Magnet Kitchens, Morley Street, Loughborough. A  CPAD is on the wall at the side of Vets4Pets, Park Road, Loughborough.

Back in Shepshed we have fitted CPAD’s on the outside wall of the Out Of India Restaurant, Ashby Road, Shepshed and another on the wall of Christchurch Methodist Church, Field Street Shepshed

We have now fitted 17 CPAD’s in our communities, but we would like to put more into the community.

We would like to thank all of the proprietors of premises for giving us permission to fit these CPAD’s in our communities.

Following on from the last article Shepshed Lions Club Community First Responders are keen to give demonstrations on how to administer CPR and use a defibrillator. If you are part of a community group, club or association, or a member of the public, and you would like to arrange a demonstration please contact scheme coordinator  Bob Lilley on 01509 508265 or by e-mail at thelilleys15@gmail.com.

The demonstrations are free of charge, but we do invite you to make a donation to our funds to enable us to buy up to date equipment.